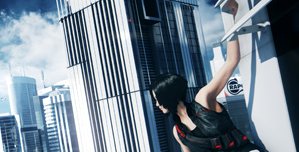 It was announced for 2016, but it seems, that the next Mirrors Edge is on the way to be released in 2015.
I found no official release news, but you can pre-order the X-Box version in the Microsoft store:

Mirror’s Edge 2 for Xbox One

“The return of Faith
Mirror’s Edge 2 marks the return of heroine Faith Connors in this all-new, first-person action-adventure game from DICE. Powered by the Frostbite engine, Mirror’s Edge 2 immerses you in a magnificent dystopian world where you’ll uncover its darkest secrets. Discover the origin story of Faith and delve deeper into the inner workings of the city and the world around it.”

I must confess – I am excited. The first Mirrors Edge was a great game experience,